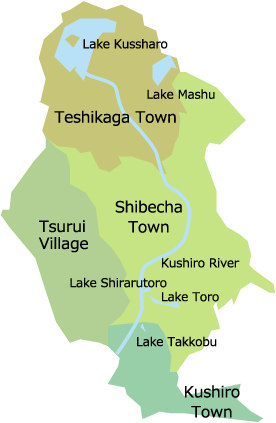 The Kushiro River is a first-class river system with a total length of 154 kilometers. It originates from Lake Kussharo in Teshikaga Town, and flows through the towns of Shibecha and Kushiro before emptying into the Pacific Ocean. For many years, the river served as an important route for transporting sulfur, lumber, and other materials between the inland areas and the Kushiro coast. This role ended when the Senmo Railway opened, and rail became the primary means of transport. However, it is still one of the most important rivers to the people of Eastern Hokkaido.

The Kushiro River has an elevation difference of just around 120 m, and is known for its gentle currents. This is a rarity in Japan where most rivers have rapid streams. The fact that it does not need a dam to control its flow is also uncommon for a first-class river. The river basin’s area covers parts of Kushiro Town, Shibecha Town, Teshikaga Town, and Tsurui Village, with the river gently meandering through the Kushiro Marsh as it heads to the ocean. An abundance of wildlife can be found in this area, with rare animals such as Japanese cranes, Siberian salamanders, Blakiston’s fish owls, Hokkaido deer, and endemic plants such as Yachibouzu tussocks and the Kushiro Hanashinobu, a type of Jacob’s-ladder.

The Kushiro River basin is a place where you can feel the wind on your skin while canoeing downstream through the Kushiro Marsh, relax in some of the most famous hot spring resorts in Eastern Hokkaido, or experience wildlife up close. Here you will lose track of time as you immerse yourself in nature. A short stopover is not enough to discover the hidden beauty in this river basin. 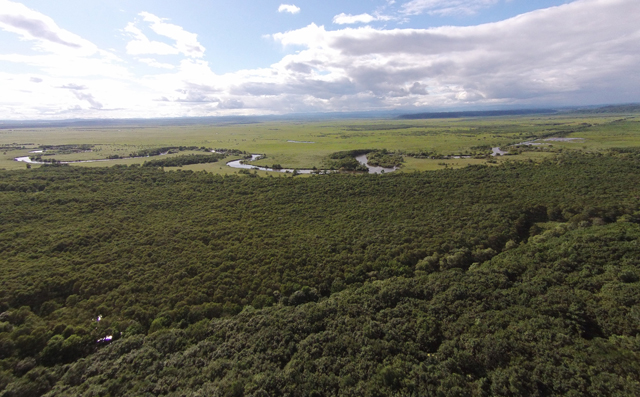 >>The Nature of the Kushiro Marsh